Wholesale Electricity Market (WEM) of Ukraine was established in 1996, modeled on the «model pool» of electricity in England and Wales. WEM is the well-ordered sales system for electricity energy operations. Since creation for long time WEIM's operating activities was unstable as well as the whole energy industry. Foremost it was caused due to the problems of non-payments and accumulated debt for the released electricity by consumers. In particular, the various forms of barter payments were prevailed till 1999, and only about 6% of the payments were obtained by cash. It became possible to break this trend only in 2000-2001. Since 2000 there has been a steady trend of the full payment receiving for the released electricity as a results of implemented several measures by local government including beginning of privatization and hiring of new managers to the industry.

The basis of electricity industry in Ukraine is the United Energy Systems (UES), which provides centralized electricity supplu to consumers, interacts with the energy systems of neighboring countries, provides export, import and transit of electricity. UES combines energy generating capacities and distribution networks of regions in Ukraine, which are interconnected by electricity transmission lines between each other. 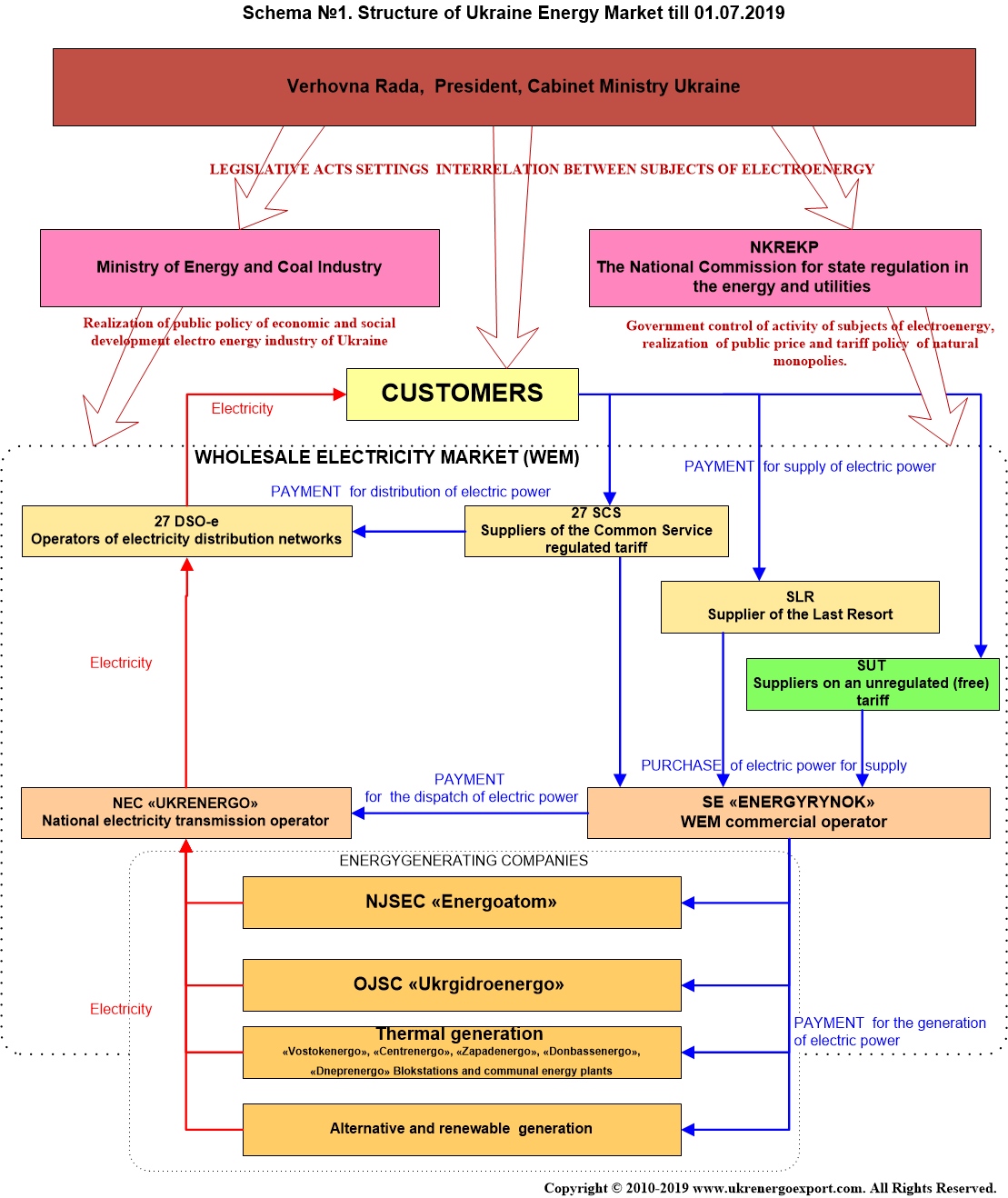 The market operates on the basis of regulatory and law base formed by Verkhovna Rada, President and Cabinet of Ministers of Ukraine. Ministry of Fuel and Energy is the central government authority assigned to generate and implement long-term and medium-term programs for the industry development. National Electricity Regulatory Commission (NERC) is the state regulator authorized to implement state pricing and tariff policies in the industry, to defend interests of consumers on the market of natural energy monopolies.

WEM operates on the outdated model of "single buyer" (pool). All parties of energy marke - Licensees (generating companies, distribution companies, electricity suppliers) form the Wholesale Electricity Market (WEM). Council of the WEM is the Executive body of the market. State Enterprise "Energorynok" is a commercial operator of WEM and thus a "single buyer". NEC «Ukrenergo» is the owner and operator of the main networks of the voltage class 220 kV-750 kV. It is performing dispatcher functions as a WEM technical operator.

Power-generating capacities of WEM are nuclear, thermal, hydro and alternative energy generation with determinated capacity of about 53 925 MW (see Figure 1). 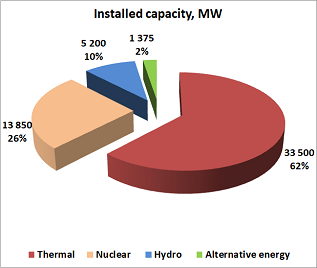 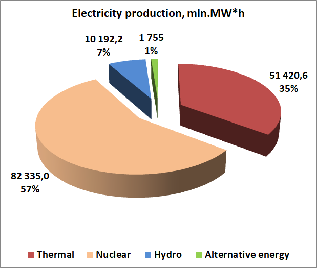 The average annual electricity production of WEM is about 140.7 billion kWh, taking into account needs of Ukrainian consumers.(see Figure 2)

Distribution systems operators (DSO-e) are represented on the WEM according to the number of regions: 25 regional branches (oblenergo) and two municipal energy companies (Kyiv, Sevastopol).

The WEM electricity suppliers are divided into three groups by the licensing rules:

The first group is a common service providers which are operating at a regulated (fixed) tariff. It's about 40 monopoly companies on territories: 27 distribution systems operators and some medium-sized network owners in the regions (Ukrzaliznytsya branches, etc.).

The second group is represented by one licensee. It's the  "supplier of the last resort" appointed by Government.

The third group is the largest operating licensees, as well as the Energy Company «Ukrenergoeхport», which operates at the unregulated (free) rate throughout the territory of Ukraine.

The consumer buys electricity by his choice through electricity suppliers in the SE «Energorynok», and SE "Energorynok" orders and buys the required amount of electricity from generating companies.

Physically, electricity which was produced by generating companies reaches the consumer through the transmission and distribution electricity networks according to agreements for the transfer of power between the relevant parties of WEM.

There was approved a phased concept of transition from the existing market model to a more progressive competitive model of bilateral contracts with a balancing market in Ukraine.

The law "About the Electricity Market" was adopted in Ukraine in April 2017 in accordance with the requirements of the EU directives of the third energy package. The law obtains the liberalization of the electricity market, implantation of the bilateral agreement markets, the internal market, the "day to day market", the balancing market and the market of support services, also obtains obligation burdens for certain suppliers such as "common services "and "supplier of the last resort" etc. Taking into consideration the large volume of work for the implementation of new rules, the law provides the transitional period which runs from 01.01.2019 to 01.07.2019.